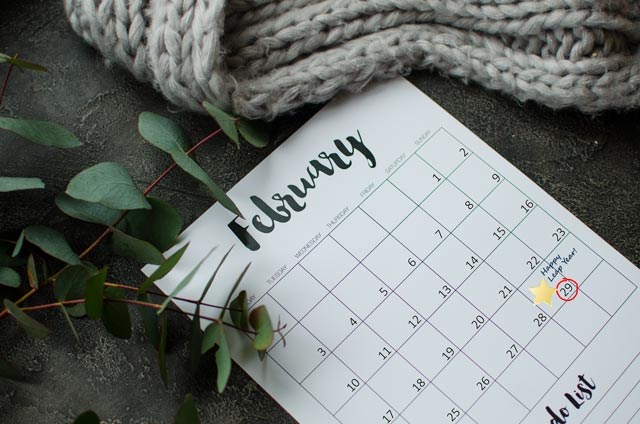 With all the talk about abolishing Daylight Saving Time (which falls next week), many people may wonder if it’s really necessary to add an extra day to our calendar every four years.

It turns out, it is.

Why We Need Leap Year

The calendar we use today, or the basic form of it, has been around for over 2000 years. Based on seasonal events like the summer and winter solstices and the vernal and autumnal equinox, there are 365 days to a standard year.

To make up the difference, Julius Caesar implemented the first leap day in 45 B.C.E. In the Julian Calendar, every four years has 366 days to keep our seasons roughly in sync. These years are also known as intercalary or bissextile years.

What Caesar didn’t realize was that his calendar was still a few minutes off each year.

Amazingly, after over 400 years, the Gregorian calendar is still serving us well.

Still, the tracking of time seems to be more of an art than a science. Since 1972, the International Earth Rotation and Reference Systems Service has occasionally inserted a leap second into Coordinated Universal Time (UTC) due to unpredictable variations in Earth's rotational period. When needed, leap seconds occur between second 23:59:59 of a chosen date, typically either June 30 or December 31, and second 00:00:00 of the following date.

However, as technological capabilities evolve, more computer systems depend on increasingly more precise accuracy, so the leap second has created some problems. Those who determine international standards are reviewing whether the practice is still necessary. The last leap second was added on December 31, 2016.

If Leap Year Confuses You Now, Be Glad You Weren’t Around in 1752

When the Gregorian Calendar was first  introduced in 1582, the Pope decreed that 10 days be dropped from the year the switch took place, to get the calendar back in sync. But many countries continued using the Julian Calendar much longer, and the later they switched, the more days they had to omit.

England and its colonies (including America and Canada) did not switch over until after 1751, and it wasn’t easy. The year 1751 was only just 282 days long. It started on New Year of the Julian Calendar, which was March 25, and lasted through December 31. Then 1752 began on January 1.

However, they still needed to align their calendar with the rest of Europe, which was 11 days ahead. So in England and the colonies, the month of September 1752 simply skipped over 11 days. British citizens went to bed on September 2, 1752,  and woke up on September 14.

Legend has it that the Whig and Tory parties sparred over this change, with the Tories urging public protests to “Give Us Our Eleven Days Back!” However, there is not much factual evidence to suggest that “The Calendar Riots of 1752” are little more than historical rumor.

The term “leap year” probably refers to the fact that during standard 365-day years, the year begins and ends on the same day of the week, and each year, that advances by one day. On Leap Year, there is a days’ difference.

Leap years always coincide with the summer Olympic Games and the U.S. presidential elections. Other world-changing events that happened during leap years:Historic events that occurred on leap day:In some cultures, it is considered bad luck to get married during a leap year or on a leap day.

But many feel that having a leap day birthday is good luck, and they’re probably right: the odds of being born on Feb. 29 are one in 1,461.

Otherwise, being a “leapling,” as with all things, will likely be a mixture of the good and the bad. For one thing, state identification cards won’t list your actual birthday, but assign you either February 28 or March 1. But you’ll celebrate your 15th birthday when you’re 60.

If you’re not born on leap day, how you spend February 29 is up to you. Whatever you do, make it fun!